It’s time for another cake box hack! Some of you may have seen the mocha cupcakes I made a couple weeks ago. I reworked them a little and also made vanilla latte ones for Pamper & Products, a small business showcase the Mildenhall Spouses’ Association hosted. Everyone loved them! I made a double batch (two boxes), so I still have a bunch leftover. I have a crafting afternoon with some friends this afternoon that I plan on bringing them to. As much as I love these cupcakes, there are too many for just me to eat. I’m at least pretending to eat healthy most days.

This recipe is very similar to my horchata cupcakes recipe. I’ve replaced the liquid and omitted cinnamon, but they’re pretty much the same otherwise. Read on to learn more!

Like I said, I made two flavors. I made two boxes of cake mix together and split them before adding the pudding, which in hindsight I’d do differently. Hand-mixing the pudding doesn’t work as well as a mixer, and it’s harder to mix in later.

espresso powder as needed for making flavor stronger and garnish

***Additional 1/4-1/2 cup of coffee is needed if making full-sized cupcakes. Bonus if you use mocha or vanilla latte!***

In a large mixing bowl, whip egg until fluffy. Add coffee, vanilla, and mix to incorporate. Add softened butter and mix. Add pudding and cake mix. Using your mixer of choice, beat on medium for 2 minutes.

Pour batter into lined cupcake pan, filling to 3/4 full. Bake for 19-25 minutes. (My mini cupcakes took about 15, whereas my regular cupcakes took about 20, but this will vary depending on your oven. Check regular at 19 and mini at 10!) When a toothpick inserted into the center comes out clean, they’re ready! Take them out and place them on a cooling rack. I like to take them out of the pan so they don’t continue to cook–plus I needed the pan to make the rest!

Pour roughly 1/4 cup of coffee/latte/mocha into a mug/glass measuring cup/whatever you were using before. Take a basting brush and brush the tops of the cupcakes. If you don’t have a basting brush, you can dip a spoon into it and gently pour/rub the spoon over them. Let them cool for a couple of hours or overnight. You can put them into the freezer if you need them sooner!

While the cupcakes cool, it’s time to make the frosting. This works best with a mixer!

Beat butter on medium-high until smooth. Add vanilla and slowly add coffee and mix. Slowly add powdered sugar until desired consistency is achieved. I like to use about 4 cups, but I’ve seen recipes that call for twice as much. The key is for the frosting to hold its shape.

Do NOT refrigerate frosting or else you’ll have to thaw it on the counter before using as it will harden!

After the cupcakes have cooled and just before you frost them, give them one last brush with coffee. Fill a piping bag (or zip-top bag if you don’t have one) with your frosting, and get going! I’m sure you can find a ton of frosting techniques in YouTube tutorials, so watch a few and have some fun! This time I chose a star tip and started with a spiral, but ended up switching to a straight up slow pull (that’s what she said!) because the mini ones were a little trickier. Surely these icing techniques have names. Someone help me before I get into trouble!

I like to garnish these with a dusting of espresso powder. If you aren’t familiar with this, it’s like instant coffee, except it’s a fine powder. It dissolves a lot easier in hot and cold liquids, so I use it a lot.

Keep cupcakes in an airtight container and eat within a day or two. Mine won’t be surviving that long because I’m making other people eat them.

Some tips and tricks I’ve learned in my cake box hack adventures:

Do use softened butter in your cake mix. Using the mixer to warm it up doesn’t work as well and you’ll end up with clumps. This isn’t a pastry dough, it’s a batter.

If using a typically hot or cold liquid, make sure it’s room temperature before starting. I used to ignore these when baking, but it really just makes more work for yourself and could mess up your mix if you don’t take time to fix it. Just do a little prep and leave ingredients out for a little bit first.

Like above, do take your eggs out so they don’t cool the butter you just spent all that time softening. You can’t re-heat the butter once the eggs are added because, well, voilà scrambled eggs.

Always over-measure vanilla. The “correct” way to measure it is to hold the spoon over your bowl and pour until a little spills over. Anyone who tells you differently is wrong.

Pudding quality does make a difference. I used Godiva chocolate pudding for my first batch and those were noticeably better in that flavor profile. That’s not a pudding mix regularly available here, so I used Jell-o for this batch. They weren’t bad, by any means, but could be better!

Be careful when adding an acidic liquid like coffee to your frosting butter. Like shown in the photos above, it can curdle a little. I was able to whip it longer and work most of it out, but I think next time I make coffee buttercream I’ll use milk and espresso powder rather than brewed coffee.

If you don’t have vanilla, don’t be afraid to experiment! I made a small batch for a friend with almond extract instead of vanilla in the frosting. Make sure you add other extracts and flavors in smaller amounts as some are MUCH stronger than vanilla! The almond extract on mocha cupcake basically tasted like amaretto mocha! Just don’t play with this too much if you are terrible with flavor profiles. I take it for granted sometimes. 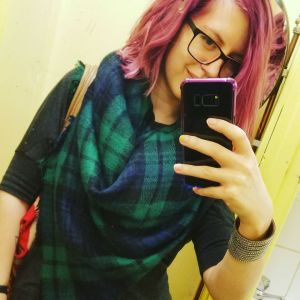 My name is Abby Brazell. I love taking on creative challenges, whether they’re crafts, food, cocktails, graphic design, or whatever! I have 3 cats, a fabulous husband, and a passion for writing. Click below to follow my adventures!

Find me Around the Web